Aka. the day of automated testing.

MvvmCross is an excellent framework for data binding ++ on Xamarin's supported platforms. Stuart Lodge gave a talk explaining the motivation, history, philosophy and current state of the framework.

MvvmCross makes it easy to implement the MVVM-pattern on iOS, Android, Windows Phone, Mac, Win RT and others, and facilitates code sharing of the ViewModel logic across all the supported platforms. With the help of PCL (Portable Class Libraries), you can achieve code sharing in the upper 80%s of your code base. Even more if you use little custom UI. The view itself cannot be shared, and that is as it should be. 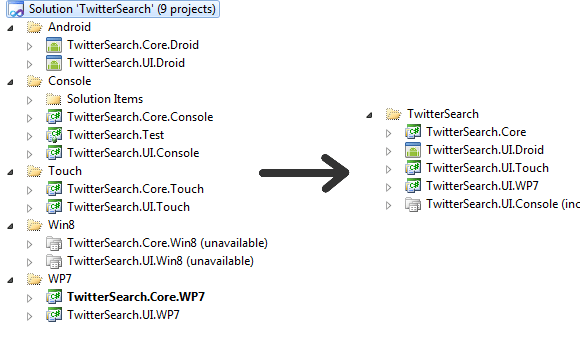 Properly decoupled view models are easy to test and with the code shared across all your platforms, the tests will have high value.

MvvmCross enables cross platform development with native UI and performance, together with easily testable code. I've used MvvmCross myself and highly recommend it to everybody interested in multi-platform development. For an introduction, check out the MvvmCross N+1 video series.

Venkat Subramaniam gave an introduction to mocking in C# and helpful pointers when working with test-driven development (TDD).

I would have stressed more that you don't start with TDD, you start with unit tests. Understanding how to write relevant and well designed tests are a precursor for a successful application of TDD.

Jon Skeet, best known from Stack Overflow and as an author of the books C# in Depth, talked about async await in C# 5.

His focus was somewhat different from Venkat's previous talk. Rather than starting with C# threading basics, Jon made the case for async and await using metaphors and code examples. As we've previously learned, asynchrony does not equal parallelism.

C# in its current iteration has many different APIs for dealing with asynchrony. Your code will be easier to develop, understand and extend if you stick with one of these paradigms. Switching points between synchronous and asynchronous code can be painful.

Jon stressed the need for giving the user early feedback. For example, show items in a list as they come in. Don't wait for all the items before giving the user the option to work with the data. Also, validate input as early as possible so that exceptions caused by bad input do not happing during the asynchronous operations.

Testing was the last topic:

C# 5 lets you focus on the difficult bits... And that's good!