GitHub has finally learned from GitLab and added GitHub Actions to their repertoire. It’s in beta now, but this means that we can use only GitHub for everything from code hosting, project management, CI and finally CD. All in one place. An alluring thought, but how mature is it?

I recently started a new project using ASP.Net Core 3.0 and decided to take GitHub Actions out for a spin.

The project to build and test

Simplified, the solution’s structure within the repository looks like this:

One .Net 2.1 standard library for the business logic, one ASP.Net Core 3.0 Web API for the actual service controllers, one xUnit unit test library for unit tests and lastly one xUnit library for end-to-end tests of the whole API. In the following I’ll show how to build and test the structure above on macOS, Ubuntu and Windows on every commit on any branch or pull request.

Add GitHub actions to your repo

First, we add GitHub Actions to our repo. The images are illustrative from another repo than the one mentioned above:

GitHub Actions, unsurprisingly, relies on actions to specify workflows using YAML. To get started, we’ll scroll down in Popular continuous integration workflows until we find the one for ASP.Net Core: 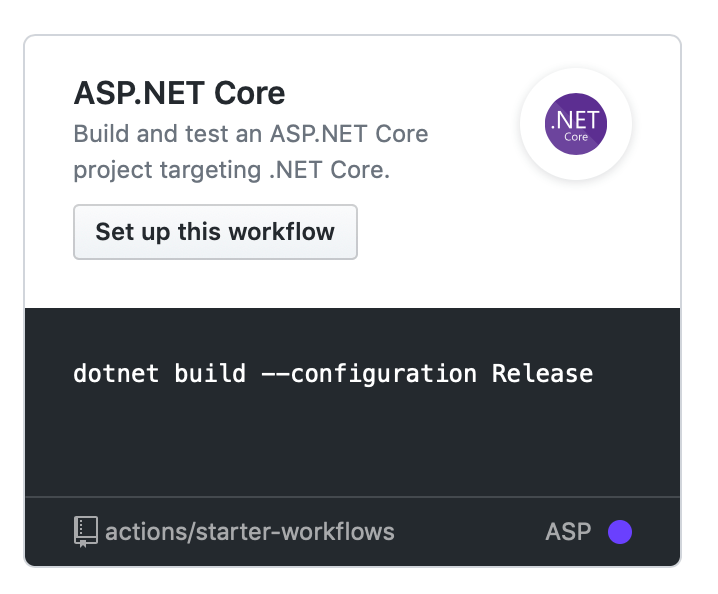 Selecting this workflow will create [repo]/.github/workflows/aspnetcore.yml and populate the file with sensible defaults. Changing this file will change our workflow and it can be extended to use other actions created by GitHub, the community or by even yourself. Let’s go through the file line by line and explain the conventions used in this specific YAML dialect.

As far as default templates go, this is both reasonable and readable.

This default template will not work on the structure above, building on all OSes and run tests, so let’s change it to better suit our needs.

Finally when you press Start commit the workflow will begin running in the same commit as you added or changed the file in.

While the above YAML works, it breaks the important DevOps principle of being explicit, describing the entire pipeline using code. Above, we implicitly assume that the Windows image contains the correct .Net Core version. A dangerous thing to assume, as this might change at any time.

The below YAML is better in that it’s explicit about the version of .Net Core that’s needed.

Running this today, however, yields the following error on Windows.

GitHub Actions are indeed promising. The workflows are easy to understand, the online editor helps with a kind of Intellisense, the available actions are open source, easily available and rapidly improving.

And it actually works, with everything in one place.

The product is still in beta though, things are still changing and the documentation is somewhat lacking. It’s also no native way to test your workflows or actions locally. However, this will change for the better as the product reaches maturity with an even bigger audience, proven patterns, and stable documentation. And the community is taking to it, providing solutions where none existed before, for instance, publishing artifacts to Azure Blob Storage.

I’ll continue to use GitHub Actions for new projects but will not port existing ones before having evaluated the final version.